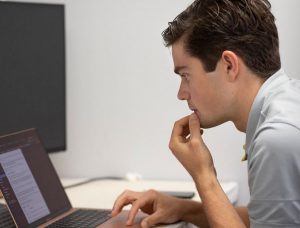 As temperatures rise, athletic performance degrades due to a loss in aerobic efficiency. This phenomenon highlights the importance of scientific tools such as LT and Vo2 testing to adjust pacing targets and ensure that athletes choose optimal pacing for races and stress the intended physiological systems during training.

Imagine you have been training hard all spring. Your Lactate Threshold is around 250 watts, and you find yourself riding in your tempo zone (213-238w) comfortably. However, as May comes around and temperatures hit the low 80s, you start to have some bad days, and you struggle to do an effort at 210w. Your CCNS coach tells you that the culprit is likely the increased ambient temperature, and you should be ready to back off your target power based on the outside environment. How do you measure exactly how much to back off? 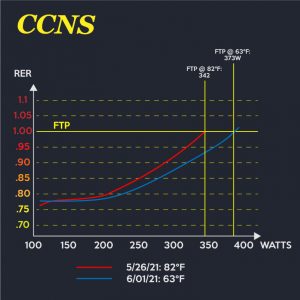 There are multiple tools that can be used to measure the adjustment you should make to your power targets, but the most accurate and easiest to use is an aerobic assessment at CCNS. Simply by heating the lab, we can replicate the demands of hard aerobic efforts, and dial in the targets you should aim for. For example, between two lab tests, we observed a rider’s power at an RER 1.0 (a widely accepted lab-based value for a rider’s Functional Threshold Power) decrease from 373w at 63°F to 342w at 82°F - a 9% difference and a 2.3% change for every 5-degree increase in temperature.

This means that at a threshold of 250w, you may be looking at a new threshold of ~228w. No wonder 210w felt hard! What was previously 85% of LT is now 93% of LT, i.e. low tempo is now high tempo. You may be wondering, can the same result be derived using a 20-minute power test? The answer to this question is no, as LT tests allow us to distinguish between energy systems, which can cause discrepancies between 20-minute tests and lab tests.

Failure to understand the limitations you face when riding at high temperatures can be a recipe for overpacing. This is because, initially, your anaerobic engine (the engine responsible for short duration efforts), will compensate for a weaker aerobic capacity. Although it sounds like this may allow you to produce close to the same power at high temperatures, you will ultimately pay a price. The byproduct of the anaerobic system is lactic acid, meaning that you will be drowning in a sea of acidity while trying to meet the power demands of the effort, and ultimately blow yourself up. Thus, all athletes need to take extra care in knowing their physiological limit, so they can pace themselves and make sure their training and racing plans are effective. The only way to distinguish between aerobic and anaerobic contribution on the way to threshold is via the lab, as a 20-minute effort can have a significant amount of anaerobic contribution. Simply doing a 20-minute test at 80 degrees is not enough to dial in your zones.

All athletes and coaches feel the subjective implications of training and racing in the heat, but these results show that lab testing is a vital tool that should be used consistently to optimize training. As passionate coaches, we are excited to have the tools necessary to understand, measure, and mitigate the effect of heat on an individual athlete’s core body temperature in training and racing performance.

Using lab testing, CCNS athletes have a serious advantage over their competitors. In cycling, the “magic workout” or “trick” to take you to the next level is often mentioned. At CCNS, access to lab testing 5 days a week and a scientific approach based on sound data has the potential to take your training and racing to that next level.