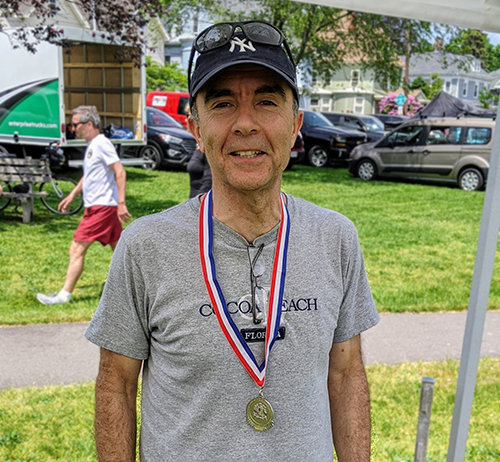 CCNS Athlete Vassos Kyprianou started riding & racing in the early ’90s. He raced a lot for the first few years, sometimes north of 65 races in a season (wow!). He was a staple at the Bethel Spring series every year while joining in on events like KSR as a Masters 50+ racer. He is also a big fan of group rides and the community around them so much that he has even organized his own group rides over the years. We took some time to ask Vassos some questions, and to learn a little more about becoming a CCNS athlete and his goals for the future.

CCNS - What brought you to CCNS?

Vassos - My friend, Bryan Haas (aka "BJ"),  had been on my case to get a coach for a while. He was very complimentary of CCNS (Coach Hunter),  and I saw firsthand the impact Hunter's coaching had on him (despite being a very successful, and knowledgeable, veteran rider already) so, I signed up!

CCNS - We love the friendly push there! What was your approach to training before visiting us?

Vassos - While I had coaching early on (the 1990s) I followed a "loose" training routine. I used to do have a couple of interval sessions during the week, a group ride and then group rides Sat/Sun unless racing.

CCNS - Ahh, the old school method. What’s the most surprising thing you noticed so far about your time training with CCNS?

Vassos - I think the one thing that's surprising for me is my current fitness level given the number of hours I am training. At just 6-8 hours per week (with a couple of 9-hour weeks),  I am probably as fit as I was when I was training 12+ hours/week plus racing. Quality vs quantity has been the key!

CCNS - Quality is always more important than quantity! Especially with the busy lives, we have nowadays! What has the training, and the higher level of fitness given you?

Vassos - About 3 years ago, I suffered from constant fatigue (most likely a complete burnout) to the point where I was riding 2-3 times a week just to stay in touch with the sport. I underwent just about every test out there and the doctors were finding nothing. One specialist diagnosed me with Chronic Fatigue Syndrome and told me I may never be able to ride competitively again.  Well, suffice to say, after about a year and a half of CCNS coaching, and several Zwift races last winter, I can safely and happily say I proved him wrong!

CCNS -  We are so happy to hear that! What’s next for you? I heard you have the Master’s games coming up!

Vassos - I have wanted to try TTs for a while. I finally bought a TT bike a couple of years ago but hadn't used it much. After talking to Hunter, I picked the Master's games 10K TT as a goal for this year and to hopefully build on it for next year when I can race in the 60+.

CCNS -  The race of truth! We know you will crush it. What’s the “big kahuna” of your 2021 season? (NOTE, Vassos would end up finishing 2nd place in the CT Masters Games 10k time trial!)

Vassos - I think the most important thing for me (in cycling) this year is to avoid a "burn-out" while staying at this level of fitness for as long as possible! I am confident with CCNS I can pull it off!

CCNS - Thank you, Vassos! The pleasure of working together is ours as well. Keep up the great work out there!