Phew! That was tough.
Congratulations to Aidan and CCNS athlete Lucas Huesman. They were the only ones to finish the Breaking 4 Challenge in under 4 hours. It was close! The duo needed a bit of pacing from Coach Vivien, who dropped off the lead pace and sat up to be lapped 20 min later. Coach Hunter chipped in as well, having gotten popped with less than an hour to ride.

What started as a group of 18-20 was down to 13-15 pretty quickly. CCNS athlete Tim Ahearn was the workhorse of the first two hours, spending much time at the front, keeping the pace high for the rest. Good teamwork from the coaches was shown when, 30 minutes into the effort, Coach Hunter realized he hadn't plugged in the laptop that was running Zwift. He had to get off his bike to plug it in. In the process, he was dropped and left behind 45 seconds. Coach Ben dropped back to pace him back up to the group.

CONGRATS TO ALL
Kudos to the other riders who hung in there to finish the 100+ miles in less than 5 hours. Steve Meisl, Adam Marong, Don Kimball, Brian Wolfe, and a couple of others managed their pace, nutrition, and the pack successfully to hit the goal time. Special congratulations to Sandy Ng, who did the 100+ mile effort on her own, after getting locked out of the group ride due to a Zwift glitch. 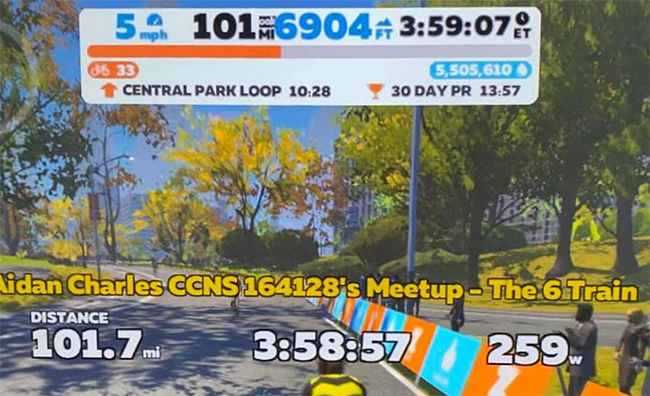