Getting to know Coach Vivien Rindisbacher

We are thrilled to welcome a Vivien to CCNS. He spent much of his summer off from college at the office, getting know to many of our clients, and helping us plan some fun CCNS projects that are coming up! 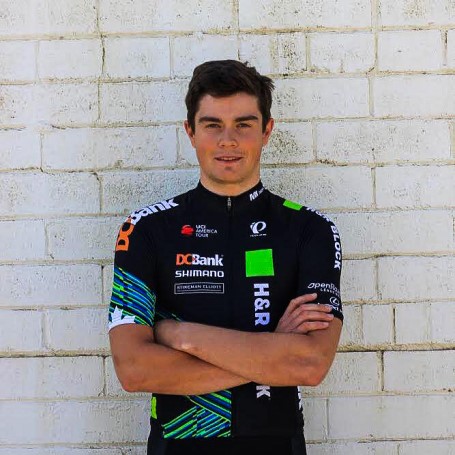 Let's get to know more about our new CCNS coach!

CCNS - Tell us a little about you and cycling. Sum up your riding and racing experience in 5 sentences or less. And... Go!
V - Essentially, I started riding my bike because my family is European, and one of my uncles was a World Champion.
CCNS - What year? And what discipline?
V - In '79 I believe, on the track. And I, I can't confirm this, I would have to confirm this, but my mom said he was once 7th in the tour.
CCNS - Wow! That's incredible. You should have confirmed that a long time ago!
V - That's what she told me. I'll take her word for it but to be honest, I'm having trouble believing this. I had another uncle who raced as a junior in Europe as well.
CCNS - You started racing as a teenager?
V - Yes. 14 years old. Got on the national team as a junior and then took it all the way to Pro last year.
CCNS - What kept you from keeping going with the pro team?
V - The lifestyle was hard, especially since I wanted to go to school.
CCNS - So you are currently in school for what?
V - Boston University, Human Physiology is my major.
CCNS - When did you first come to hear about CCNS?
V - I knew Ben Wolfe was coached by Aidan. I went to Killington High School and I knew Ansel was also coached by Aidan. Ansel helped lead the KHS team, and of course, that was a big part of my coming up through the ranks.
CCNS - So you went to Killington for High School. So... Are you are a skier or snowboarder?
V - Ski freak for sure. Though to be honest I didn't get much skiing done.
CCNS - Because of the riding and training?
V - Yep. Exactly.

CCNS - So when did you become interested in coaching riders?
V - I helped a few juniors out when I turned Pro. Just as giving advice at first. It started to make sense because I have this interest in biology and physiology. So all this couples together perfectly with coaching.
CCNS - You also are part of the staff of the New England Devo Team. What is your role there?
V - I am the Director of the U23 Team. I started with the 2019 season.
CCNS - You've helped a lot of younger athletes, but you are not specialized in coaching youth athletes here at CCNS. So, can you talk about some of the commonalities of working with young and older athletes?
V - Hmm, that's a good one. (pauses) You know the life stress that a teenager experiences? Surprisingly, that's uniform between older and younger athletes. Learning how to manage your schedule and keep a good balance.
CCNS - So you are saying, even though teenagers are teenagers, they still have a certain amount of life-stress they have to balance, the same as older athletes.
V - And perhaps more than older athletes. Juniors have a larger social component to their lives, and that needs to be balanced.
CCNS - Adding a social component to one's training is so important, at any age. Having a social community is crucial -
V - It keeps you in it. There has got to be something beyond the results and the day to day training.
CCNS - So you are no longer on a Pro team but you haven't stopped training. How have you been keeping busy out there?
V - I was running a lot, but I stopped running recently to focus on preparing for the Green Mountain Stage Race. But once that is in the past, I have a marathon planned in October, so I will be running a lot again.
CCNS - Awesome. Which marathon and what's your goal for that?
V - It's the Bay State Marathon in Lowell (MA). Sub-3 hours is my goal.
CCNS - Are you available to coach runners?
V - Yes, I have been creating running plans for a couple of CCNS runners.
CCNS - So, let's give our readers something they can use. Since you are a runner and a rider, what is your opinion? Can a cyclist run to maintain their fitness? Do you have any tips to offer?
V - Yes, a cyclist can use running to stay in shape. Totally! But a rider is going to have to be careful as they are starting out. How you run important because a bike rider is not used to the impact of running. I killed myself when I started by running too long and too fast. It's the same process as you would use as you started riding, but it's more important with running to start out easier and progress slowly. Then, if you switch back to riding, say, after a vacation, you have to give yourself a couple of days to get back to feeling normal on the bike.
CCNS - Even though you stopped riding professionally, you kept Aidan on as your coach. Any insight as to why this was?
V - The main reason I stayed with Aidan was his guidance around the social side of the sport. He constantly encouraged me to branch out and build connections, which, in the long run, created some huge opportunities for me. At CCNS, we constantly stress the idea of community, which I think is one of the best parts of endurance sports. Getting to ride and train with friends. A purely "hard knock life" mentality does not fit the bill for elite athletes anymore, let alone enthusiasts who have family and career to care for.
CCNS - Awesome insight, Vivien. Last question, what made you want to work as a coach yourself with CCNS?
V - After a year of racing Pro, I needed something else. I started running the New England Devo u23 team. This kickstarted a whole new project of working with/helping athletes achieve their goals. I reached out to Aidan for advice, and he gave me the opportunity to come along and learn from the CCNS team. I immediately loved the work I was doing and was given the opportunity to work alongside the other CCNS coaches.

Thanks Vivien, for the time and thoughts! Keep up the great work!